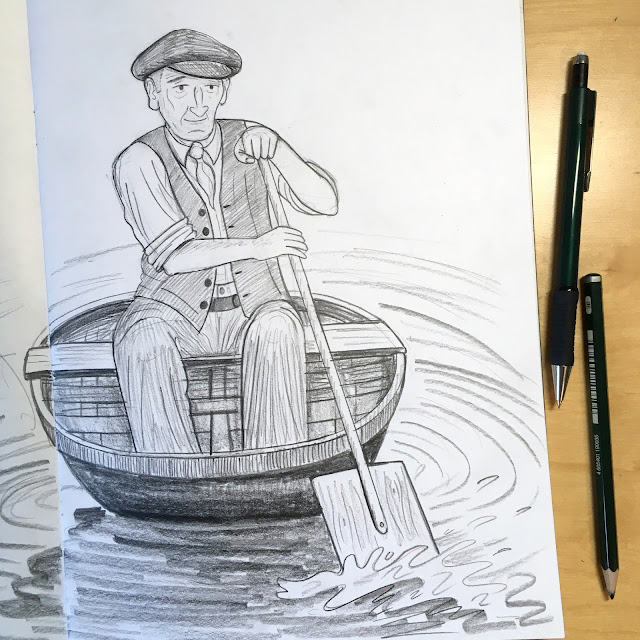 These images are based on the account of Harry Rogers, a man who lived on the banks of the River Severn in a house he built himself. There he made coracles and expertly navigated the river in this spherical craft to salvage whatever the water presented.  The coracle is an ancient form of boat that can be carried over land and manoeuvred with a single paddle. According to Wilford Byford-Jones (who interviewed Rogers in the 1960s), numerous animals could be found in his house and garden including a jackdaw and a fox cub called Billy!     References   Byford-Jones, W., (1967).  Severn Valley Stories.  Shropshire: Shropshire Star and Journal Ltd.
Read more 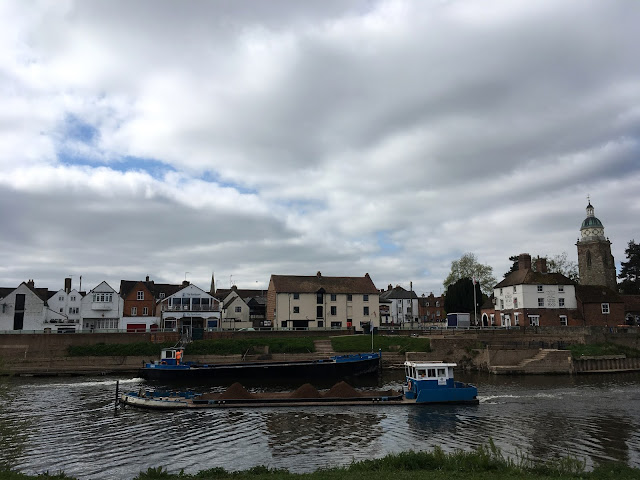 During the few hours I spent walking along the riverbank, I saw several different boats (and a solitary rower). The Severn Way was blocked at one point with heavy machinery loading sand onto barges, which then shuttled it to a location downstream. The barges (with names such as ‘ELVER’ and ‘PERCH’) look as if they are about to sink once fully-laden and sit very low in the water. A couple of canal boats were moored up and I took the opportunity to make a quick sketch. Walking north from Upton, I passed through a vast floodplain meadow that was full of dandelions and large old trees. Looking back towards the town, the view is dominated by the ‘Pepperpot’ bell tower of the church and a row of poplars.   There was a point on the path where a small stone beach had formed rather than the usual sticky mud and I was able to dip my boots into the river. Very peaceful, rippling water, which reminded me of the Wye. On the opposite bank there are some boat houses of varying shape, size and splendo
Location: Upton upon Severn, Worcester, UK
Read more 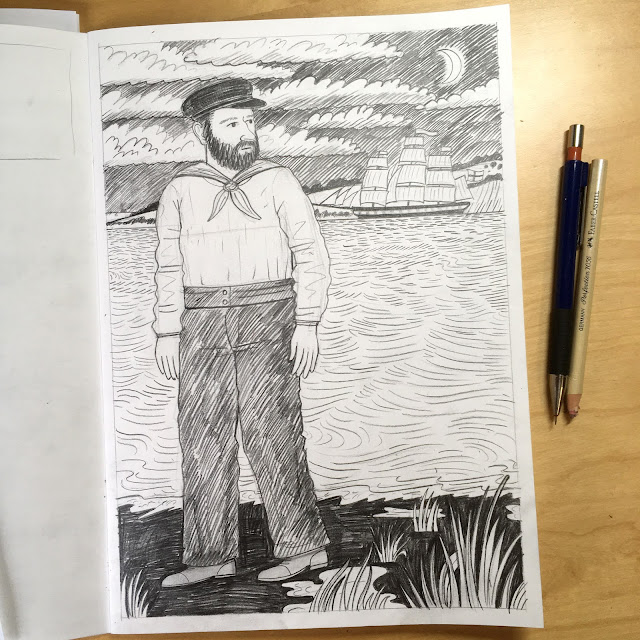 “The river’s coming down rushed and troubled as if it’s hiding something. Enter Florence Saunders paddling. Harry Kingscott and William George Montague, both with no shoes. Sarah Matthews, epileptic, shouting curses at her mother. And the entire Bedford family arguing. Enter unnamed sailor weeping with Matthias Sydamnasta of Finland, holding a rung of rigging.”   (Oswald, 2009: 20)  ‘A Sleepwalk on the Severn’ by Alice Oswald, has introduced me to a long list of enigmatic and tragic characters. The Finnish sailor, ‘Matthias Sydamnasta’ being the most intriguing. This sailor, more at home on the Baltic Sea but now appearing as an apparition on the River Severn, captured my interest. Oswald’s ‘Sleepwalk’ shows us real people, who lost their lives in the river. I searched for information about Sydamnasta and accessed the ‘Severn Project’, part of the Gloucestershire Archives , gaining an insight to Oswald’s creative methodology. Here under the title ‘Drownings and other deaths’ was the en
Location: Oldbury-on-Severn, Bristol BS35, UK
Read more 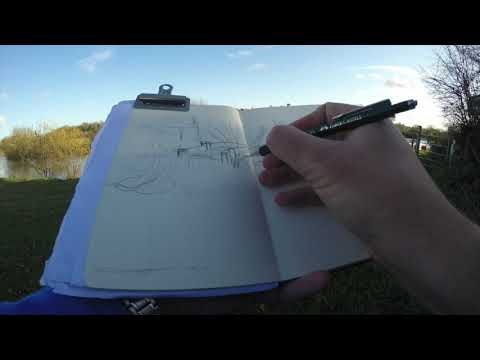 Walking north from Worcester I followed the Severn Way passing by numerous houses, sunken boats, through meadows and a pub garden (which was unfortunately closed due to the Covid-19 lockdown). A fair variety of trees, other plants and birds on this stretch...and the bright autumnal light helped give the river a more inviting colour than its usual muddy brown. As soon as the paved section of the path ended, I was pretty much alone for the majority of the journey, but there was the occasional walker sliding their way through the mud. The path gets alarmingly close to the water’s edge on several occasions and this along with the mud resulted in a slow, careful pace. Bevere Island  has a picturesque weir and a bridge that is on the verge of being considered a ruin. Being on the other side of the river would have helped as it may have given me a better view of the island. The history of this location isn’t necessarily obvious from its appearance but it has reputably been a place of sanctuar
Location: Bevere Island, Worcester WR2 6LX, UK
Read more

I Am Many Stories 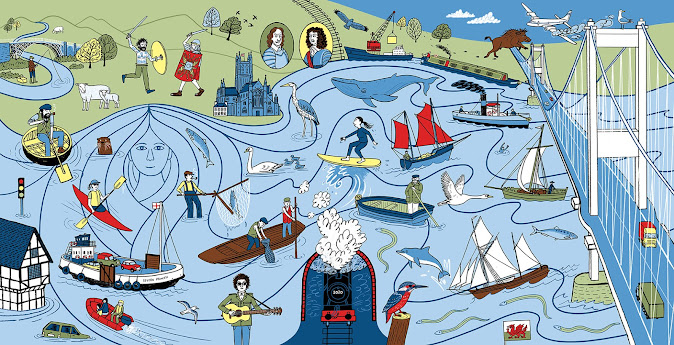 When I began investigating the River Severn, my research went in several directions such as stories of fishermen, flooding, battles, folktales and industry. I decided to combine these early investigations into one illustration, in response to the Cheltenham Illustration Award 2020 call for submissions. The brief was to respond to the statement ‘I Am Many Stories’, which seems to me an apt way of describing this river.
Location: River Severn, United Kingdom
Read more 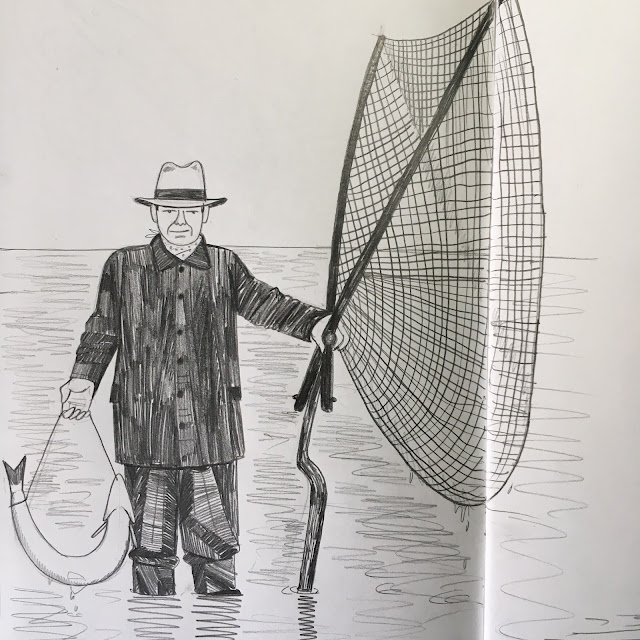 These drawings are made from archive photographs and documentary footage that show the now rare practice of lave net fishing. The moments before and after the photos were taken intrigue me and I can imagine the men wading into the river, then visualising huge salmon leaping into their nets as they stand in the freezing water, hoping for a catch.
Read more

Upton-upon-Severn to the Queenhill Viaduct (M50) 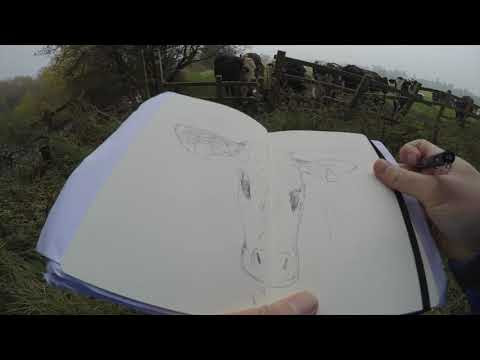 I adopted a ‘downstream, upstream’ route for this walk (as I did in Worcester), which fits in with my usual practice when location drawing. I often drift around a location and do a sort of lap, making mental notes of places to draw, before committing to a prolonged drawing. Obviously if something fleeting catches my eye whilst I’m doing this I try to capture it with a sketchbook or camera. My plan for these river walks is that I spot potential drawing sites walking to the mid-point and then engage in drawing on my return. This stretch of the river is quiet, and the path hugs the bank quite closely passing through farmland and flood plain. The unusual buildings of Upton help create a picturesque view, behind the sheep grazing. There are points of industry along the way-large vessels which I believe carry sand dredged from the river (certainly a subject I will return to draw) and what looks like a water treatment site. The directional signs that populate certain stretches of water appeal
Location: M50, Tewkesbury, UK
Read more 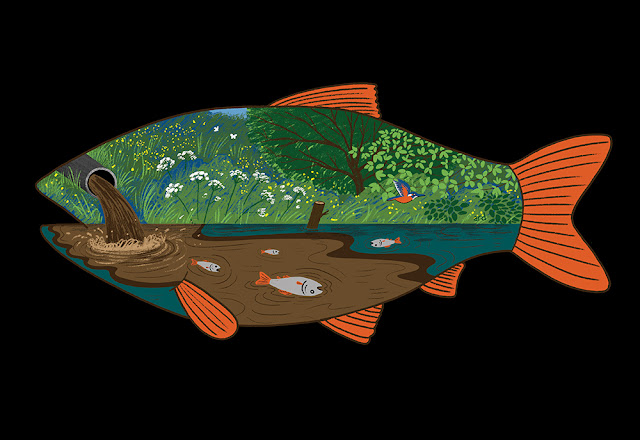 This illustration was made for a University of Worcester research project, called ‘ Sea Change ’. I designed it in response to an article in  The Guardian  highlighting how water companies regularly discharge huge quantities of raw sewage into England’s rivers.
Read more 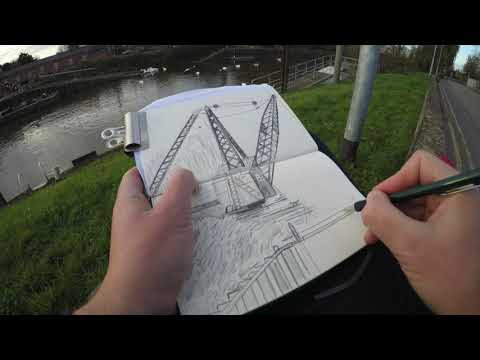 Walking this loop, once downstream and then in reverse, provided me with a good understanding of this small, but busy section of the river. The stretch is dominated by Worcester Cathedral and the reasons for its proximity to the river requires further investigation. It could be an indication of the river’s importance within trade that helped fund the cathedral. but being near a main transport artery must have helped in the delivery of the raw materials in its construction. It is the site where the remains of the ‘Cockleshell Pilgrim’ (assumed to be one ‘Robert Sutton’) where discovered. The account of his pilgrimage, written by Katherine Lack ( https://spckpublishing.co.uk/cockleshell-pilgrim-pb ) initiated this entire project. I made some work inspired by this story for the ‘Enchanted Environments’ symposium at the University of Worcester, which can be seen here: https://ardillustration.com/the-cockleshell-pilgrim . There are several small platforms at the water’s edge that suggest cr
Location: Diglis Island, Worcester WR2, UK
Read more 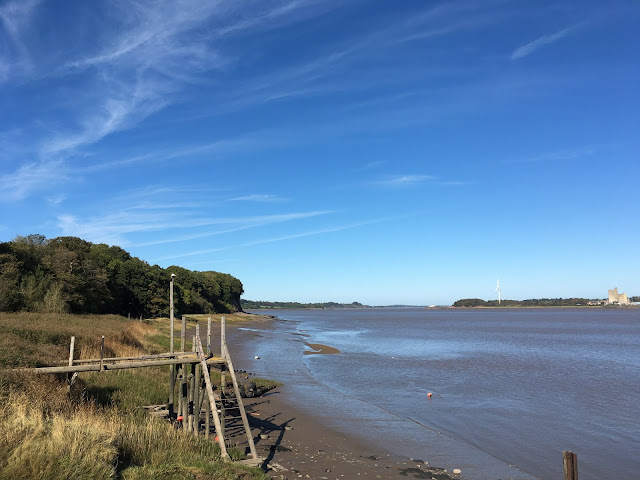 When driving back to Malvern from Chepstow in September, I made a quick detour to Lydney Harbour. The ugly industrial area that I passed through didn’t fill me with much hope, but I was pleasantly surprised to find a small harbour filled with an eclectic collection of vessels, some of which seemed to have been stationary for some time. Two huge gates held in the water and gave protection from the Severn’s tides. An Ice Cream van was doing good business and families were strolling around, enjoying the wide views across the Severn. A friendly old chap was engaging as many people as possible, drawing attention to a stone monument that was placed there to commemorate the Severn Railway Bridge disaster. On a foggy night in 1960 two barges collided, creating what must have been an apocalyptic fireball, they then smashed into and destroyed the railway bridge that spanned the river. https://en.wikipedia.org/wiki/Severn_Railway_Bridge I was aware of this terrible event, but having a clear view
Location: Lydney Harbour, Lydney GL15, UK
Read more
More posts